Big, big thanks to everyone who came by the STROKE stand at Eurobike 2019! 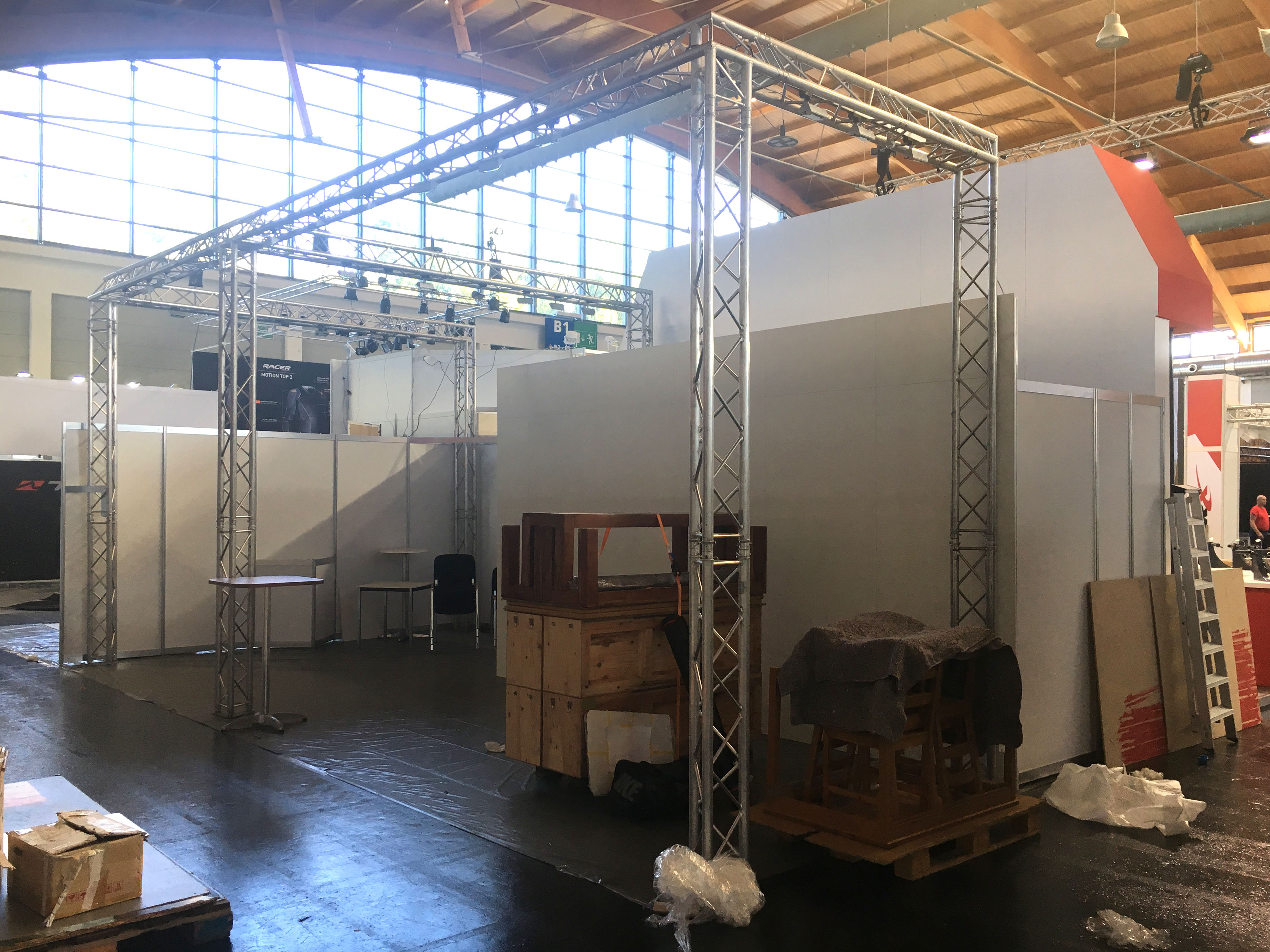 This was what greeted me when I arrived at our booth. And no Cargo Trike, either! 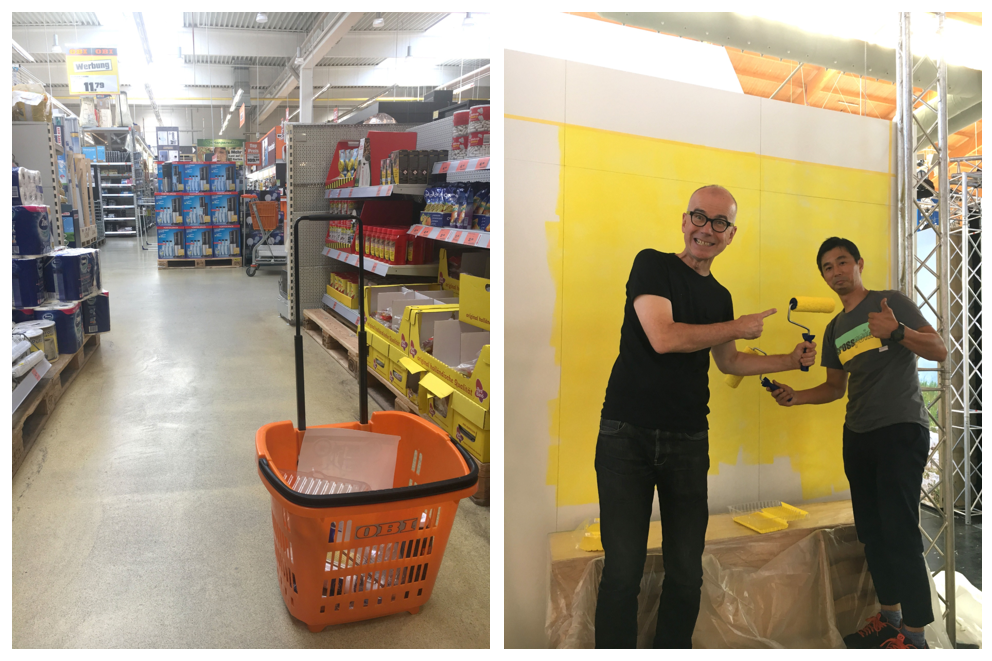 First job: a visit to the local home centre and a bit of painting. 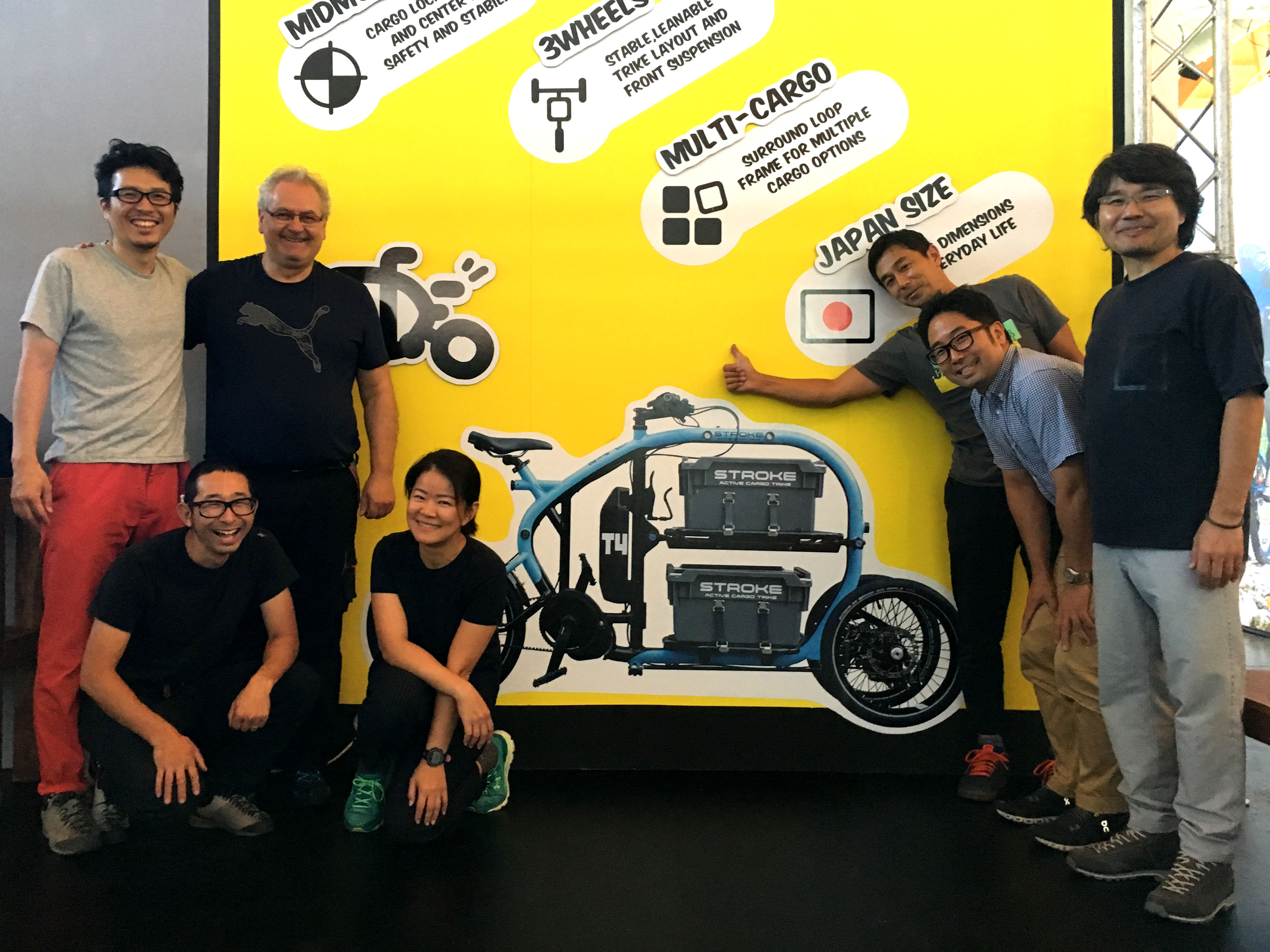 With a lot of help from Diatec, the stand was finished on time… 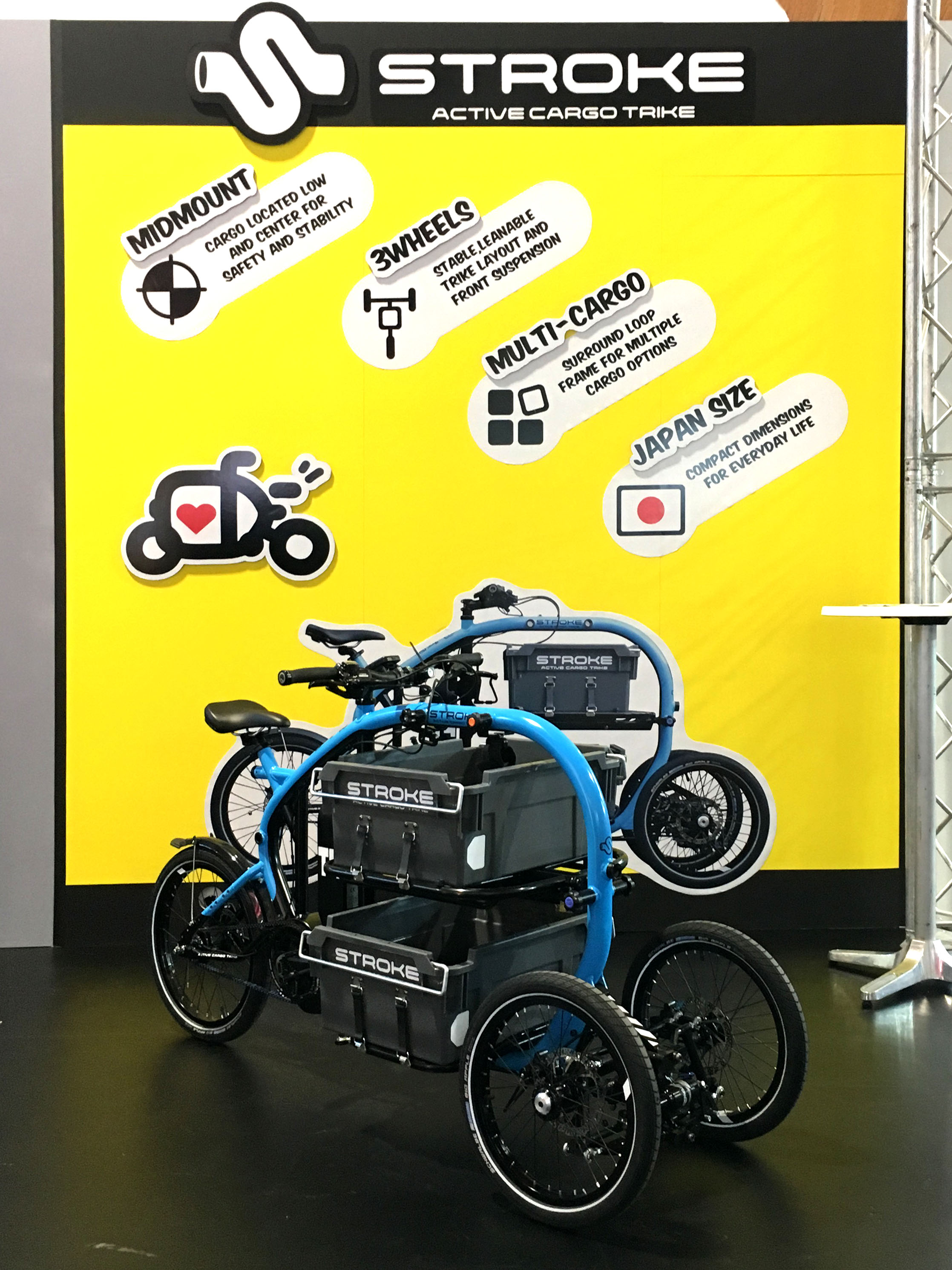 …and with a lot of help from Takeshi-san and Kano-san, so was the Trike. 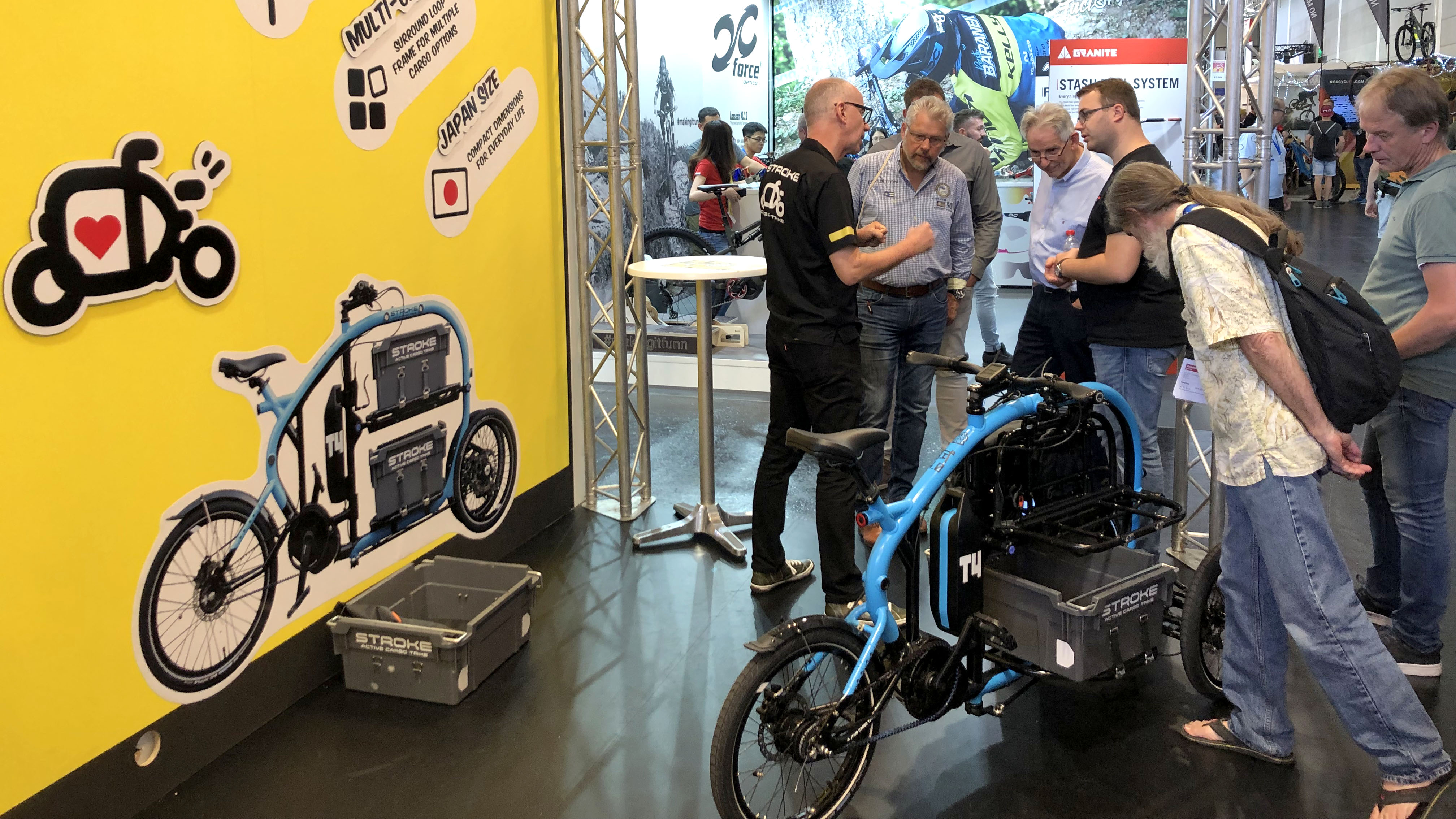 The Trike started attracting attention as soon as the show opened. 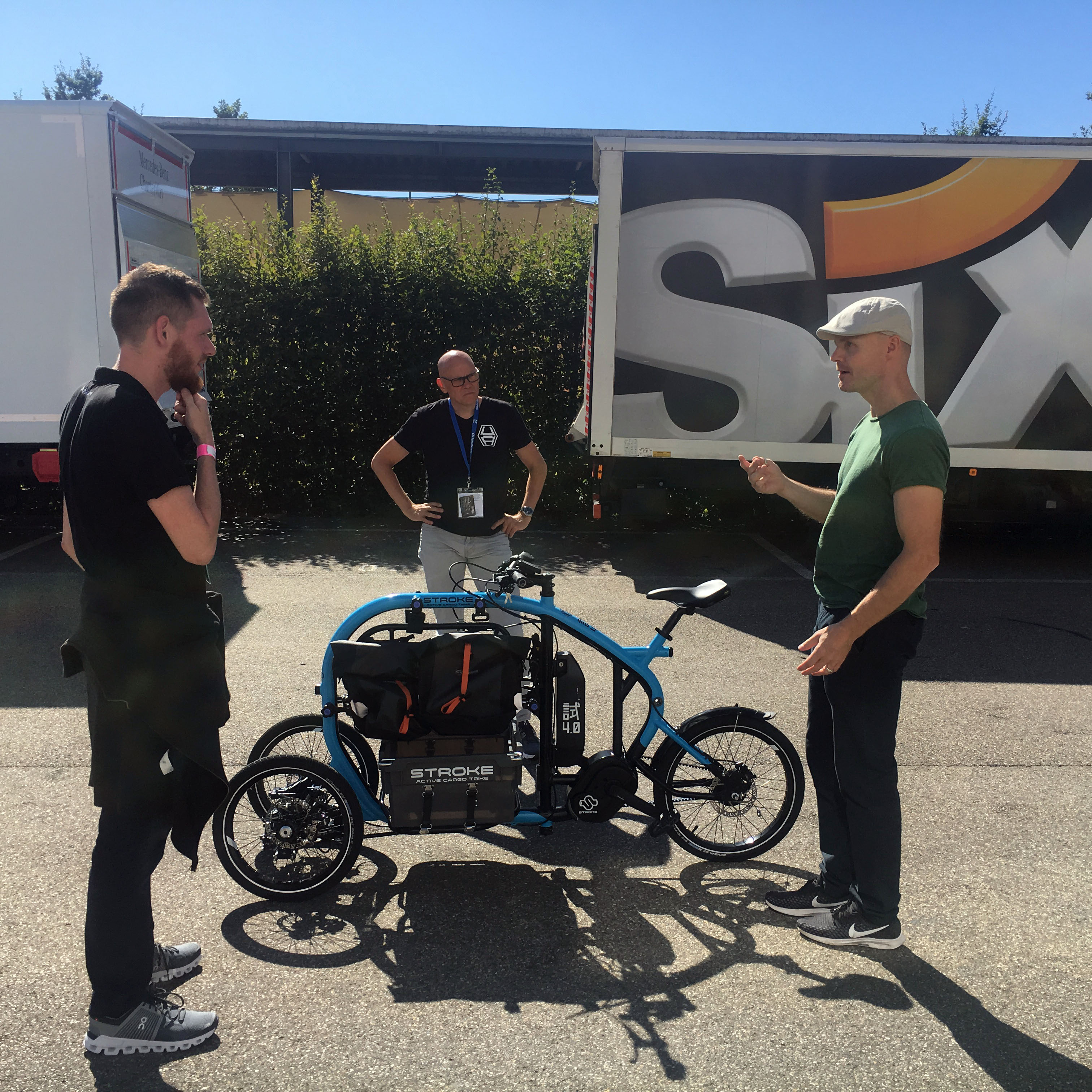 One of our first visitors was Adam, a designer from Sweden, shortly followed by Onno and Eric from major Dutch cargo bike brand Urban Arrow. Adam wants to build the Trike under licence in Scandinavia and they all agreed that the Cargo Trike is right for Europe, too!

Eric and Onno were some of the first to take the Trike for a test ride. More test rides in the video at the bottom of this post. 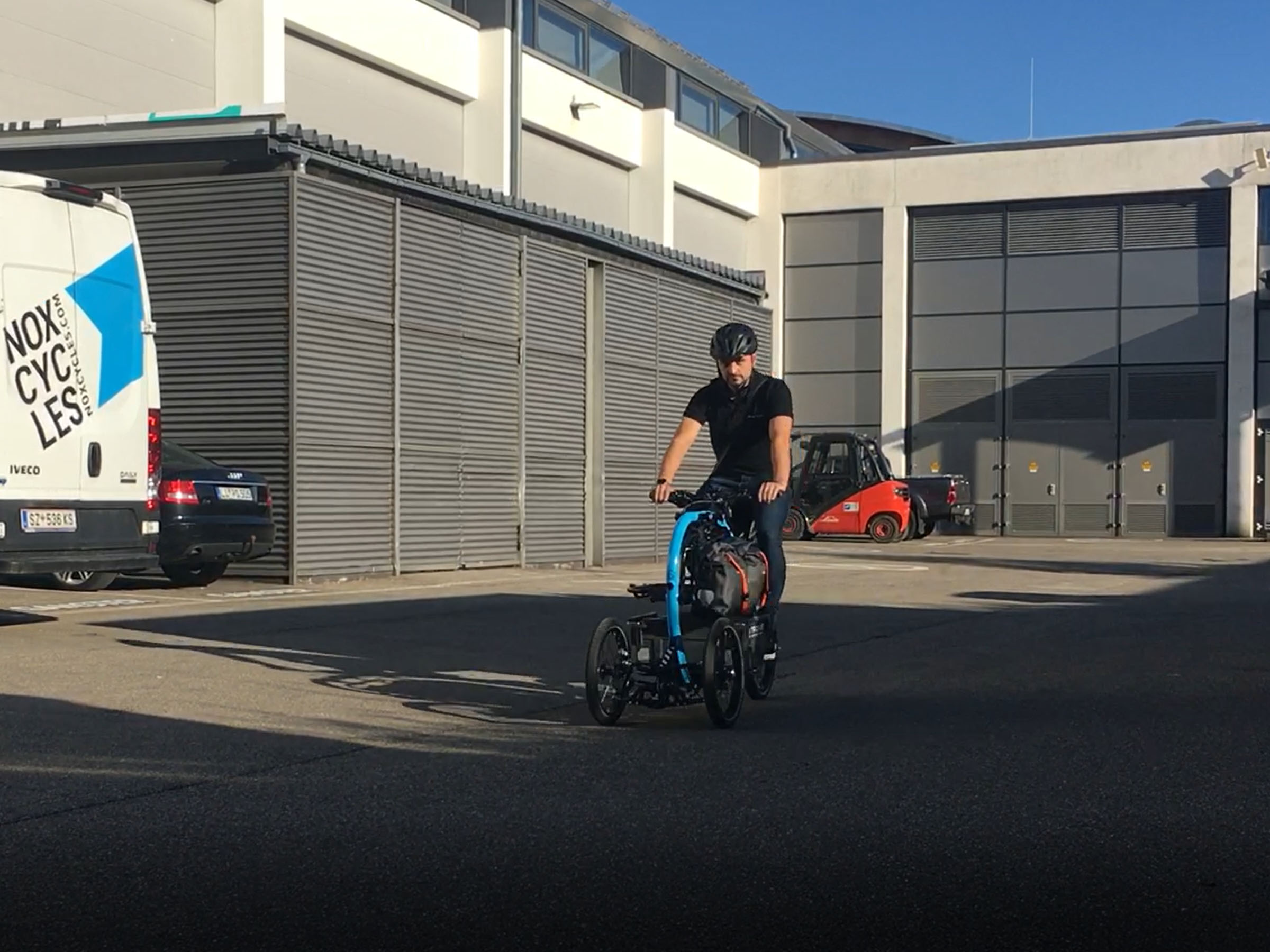 This is Marco from velotech.de 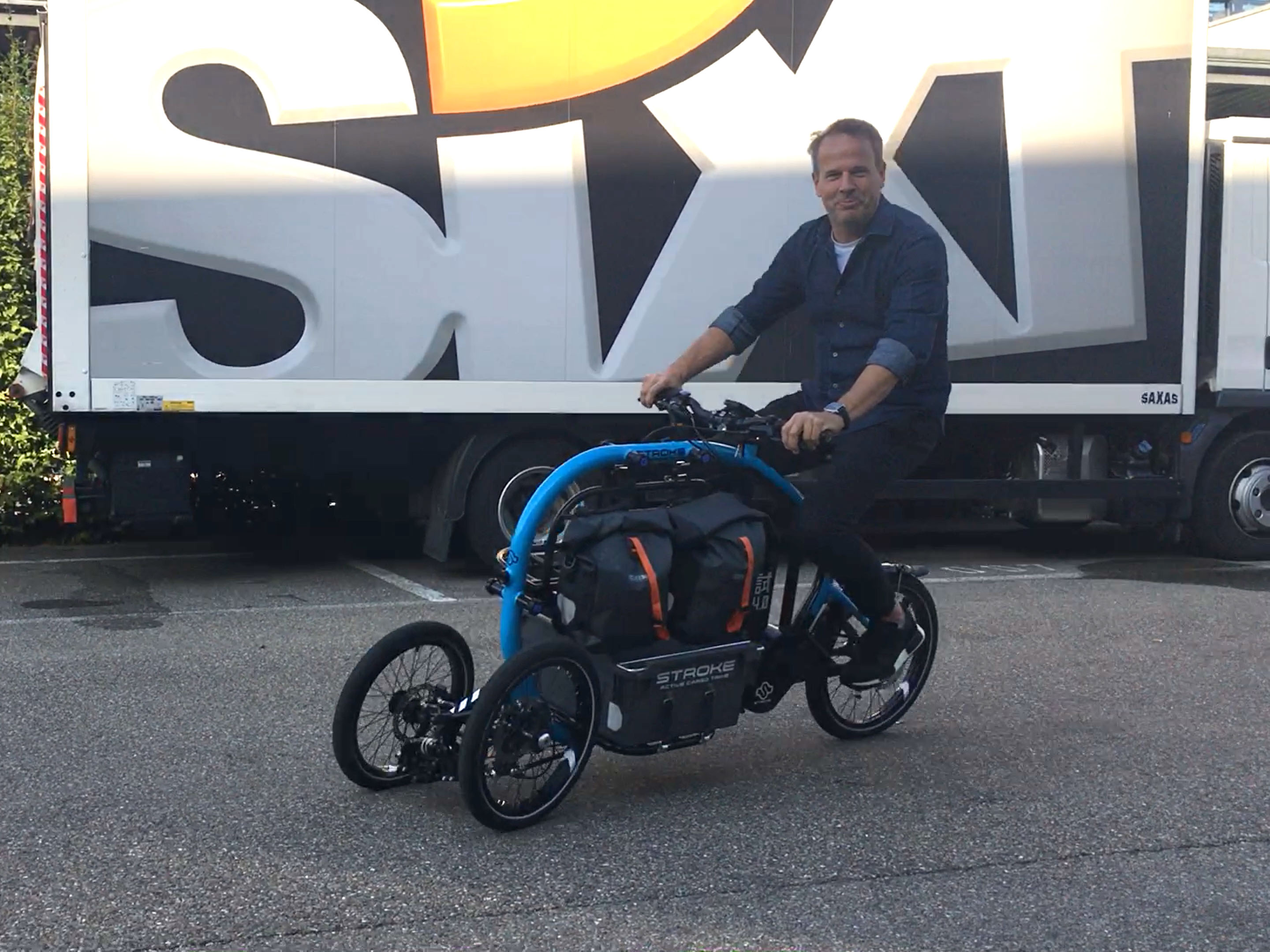 Peter, the CEO of Rotwild, asked us for a test ride. He thinks the Cargo Trike could work off-road too, with some modifications. 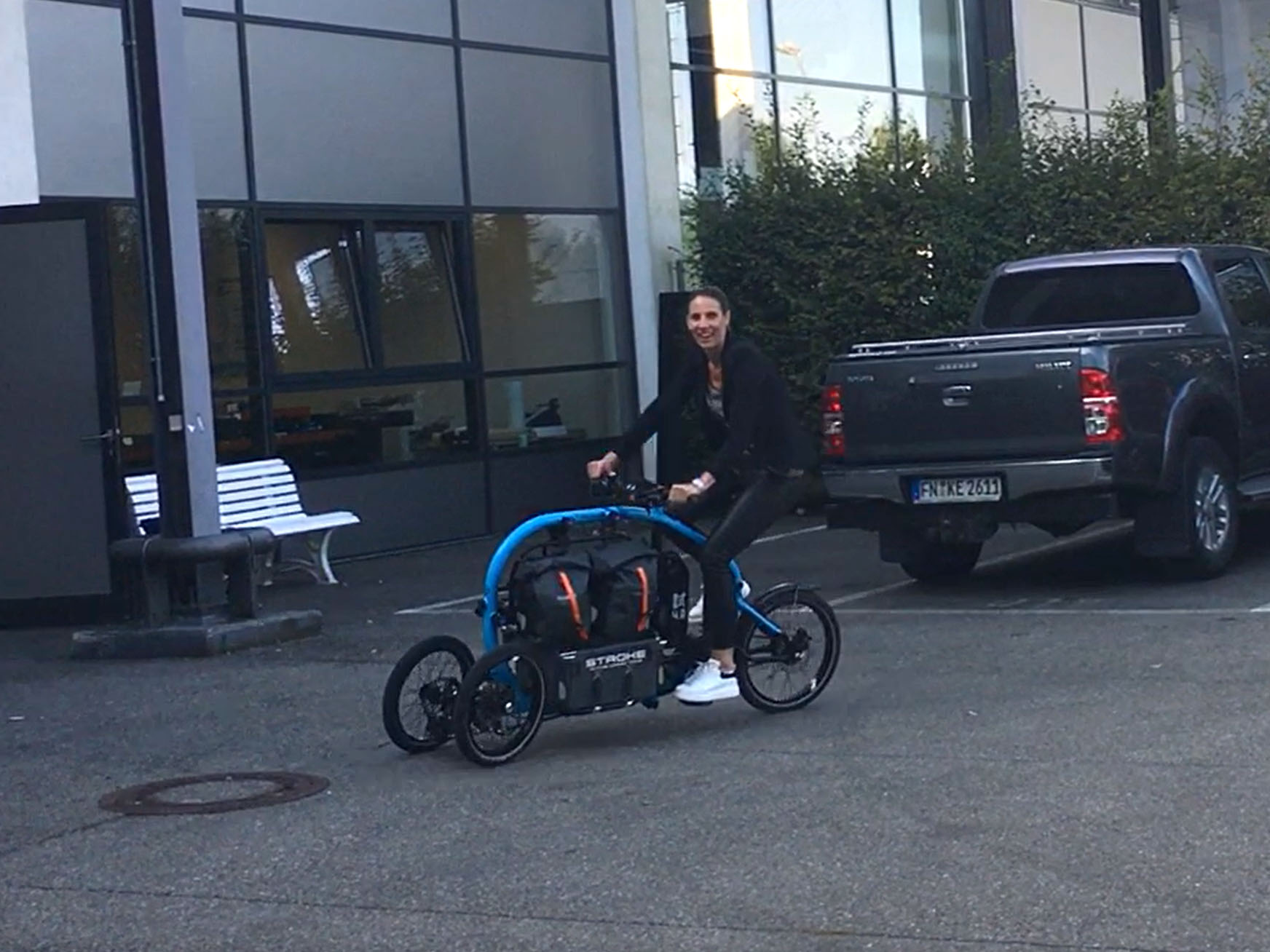 Peter called members of staff off the Rotwild stand one after another to give the Trike a try. They all looked like they were having fun! 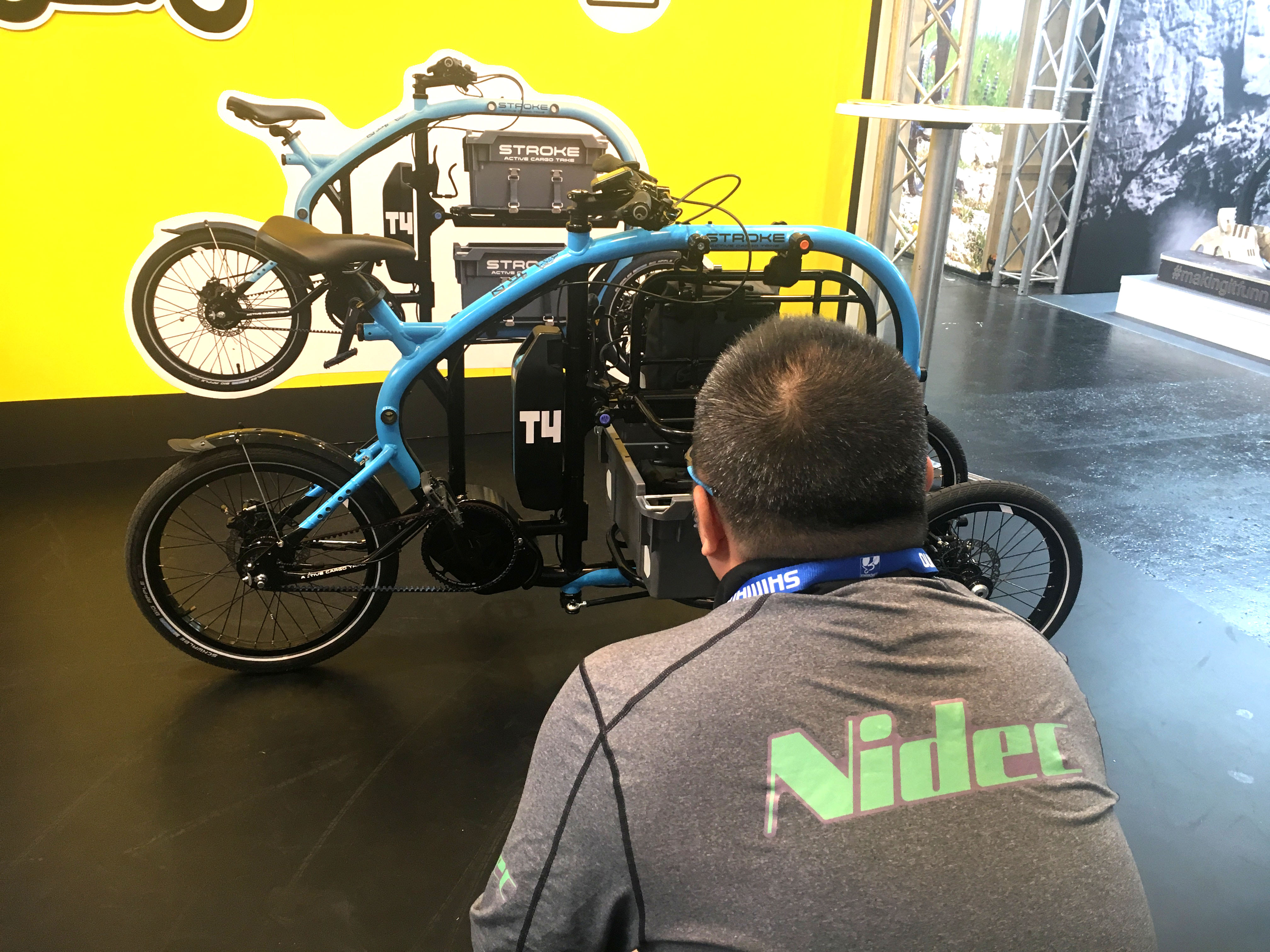 Jerry from Nidec, our motor supplier, couldn’t stop staring at the Trike. 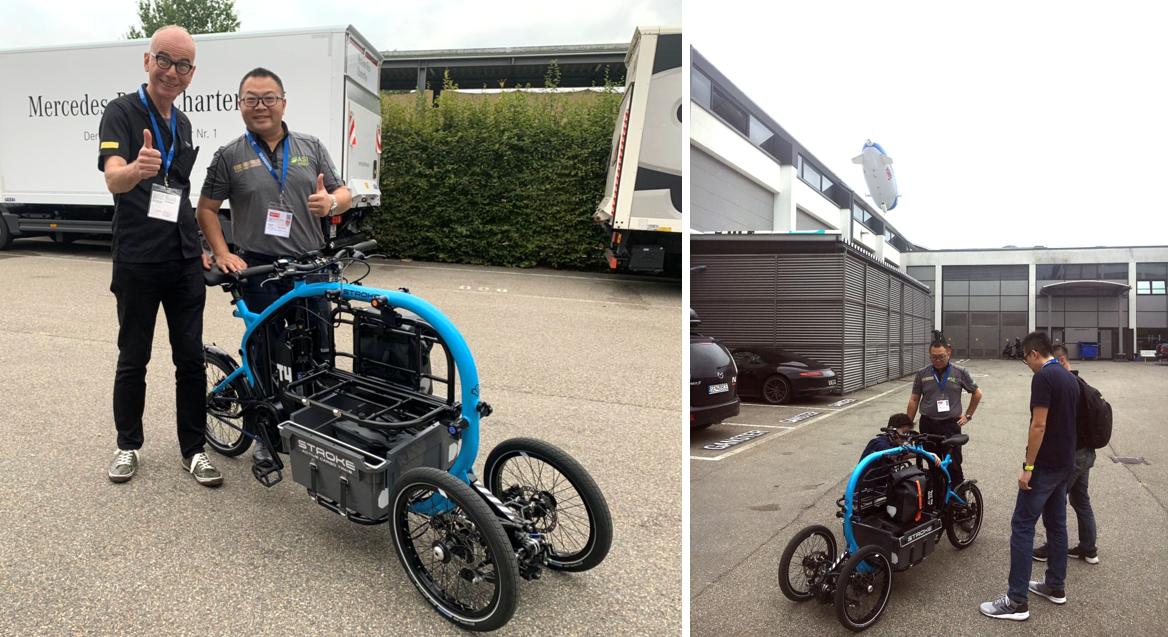 During Jerry’s test ride, we had a typical Friedrichshafen visitor – a Zeppelin. 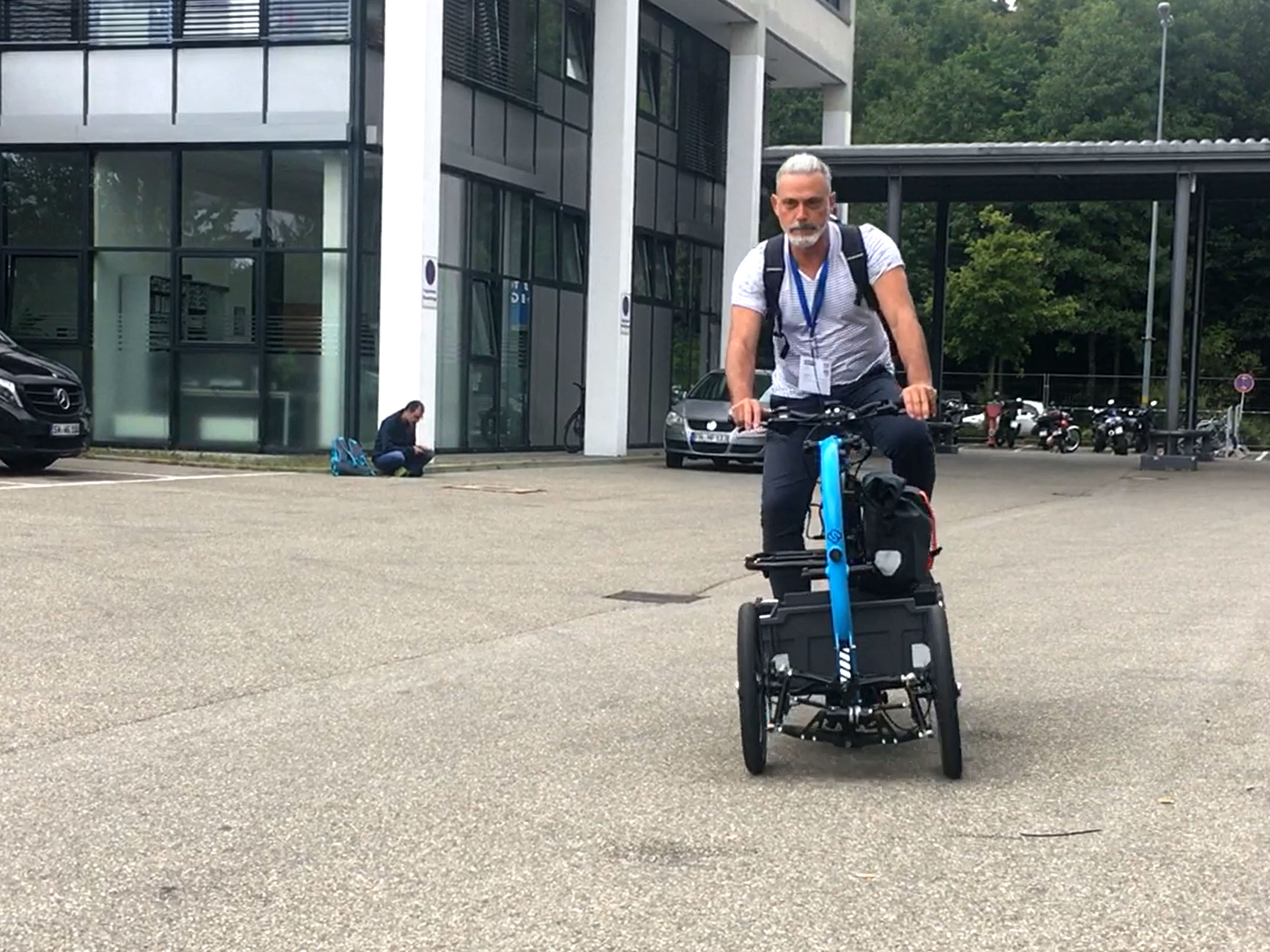 Shimy from Magnum Bikes. Full of ideas for the Cargo Trike! 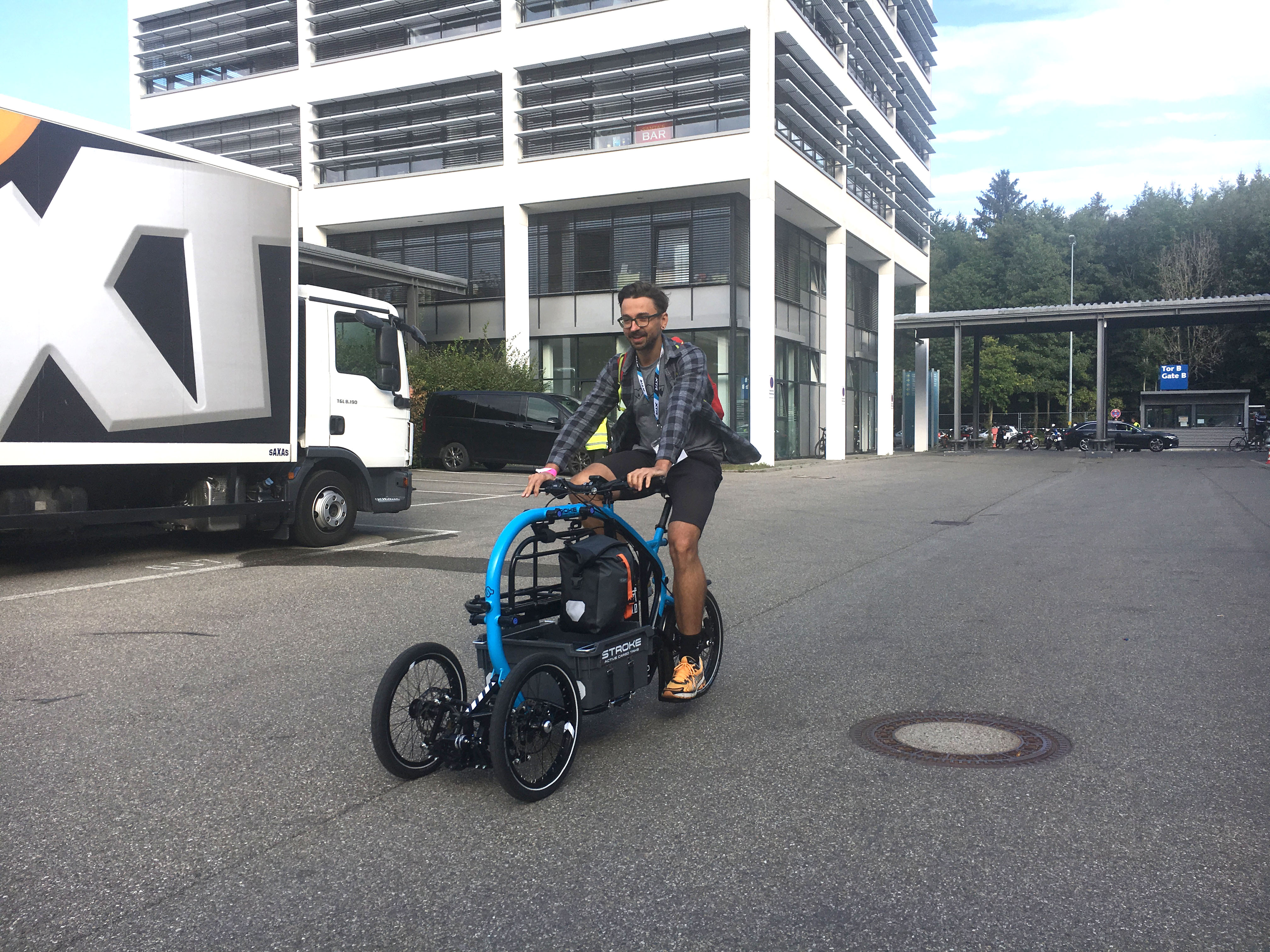 Ben from BERGAMONT also came to find us.

Stephan from Wicked Wheels in Majorca was one of our earliest followers on Facebook. He “…loves this thing!” 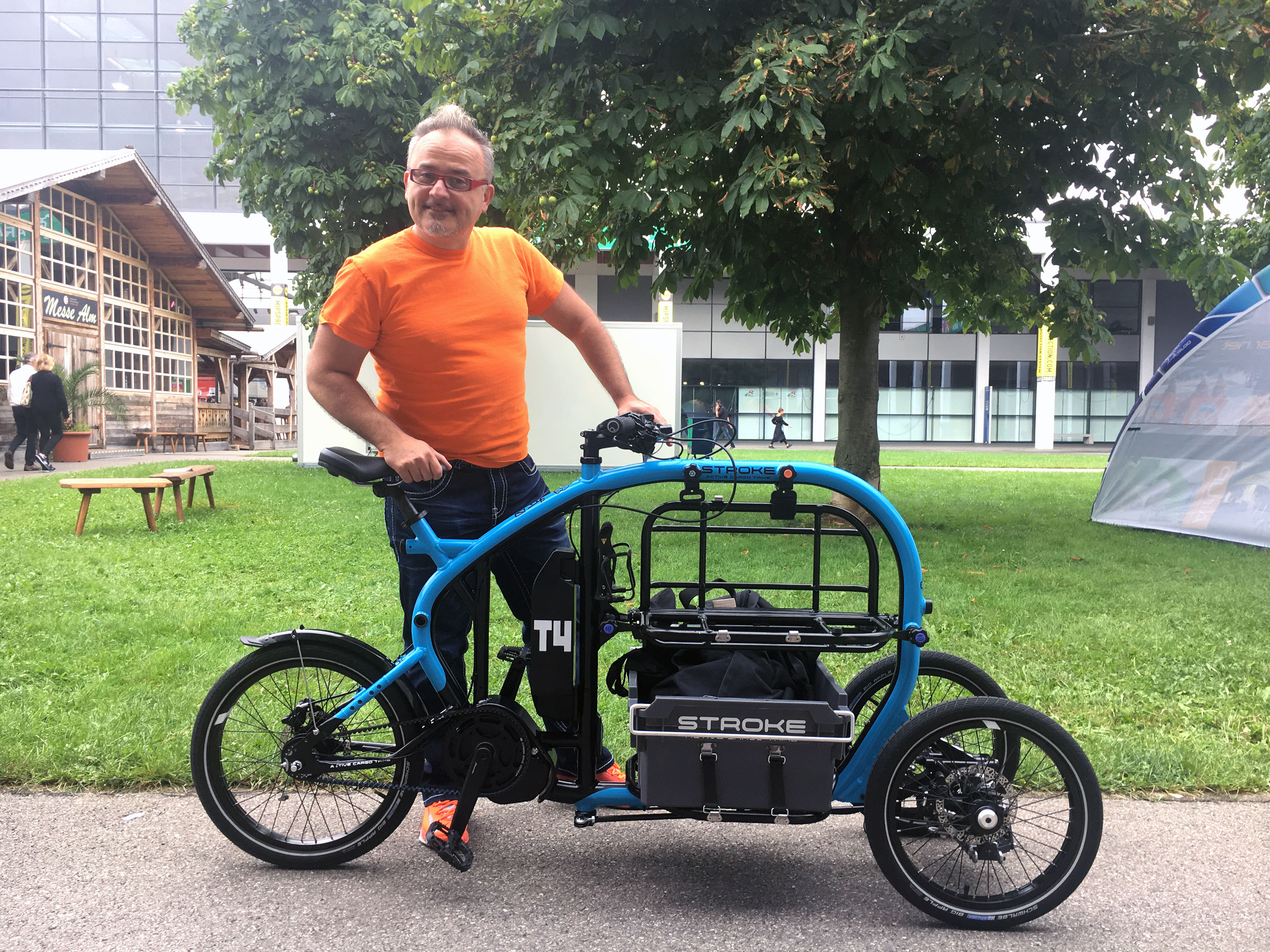 Jens is another long-term follower. He came 700km on an overnight train!

Finn and Henrik, both of whom follow us on social media, took time away from the FINN & KO stand to come for a test ride.

Bloggers cargobikevlog – “…the most exciting bike at the show…” – and bakfiets.blog, the speedy rider. 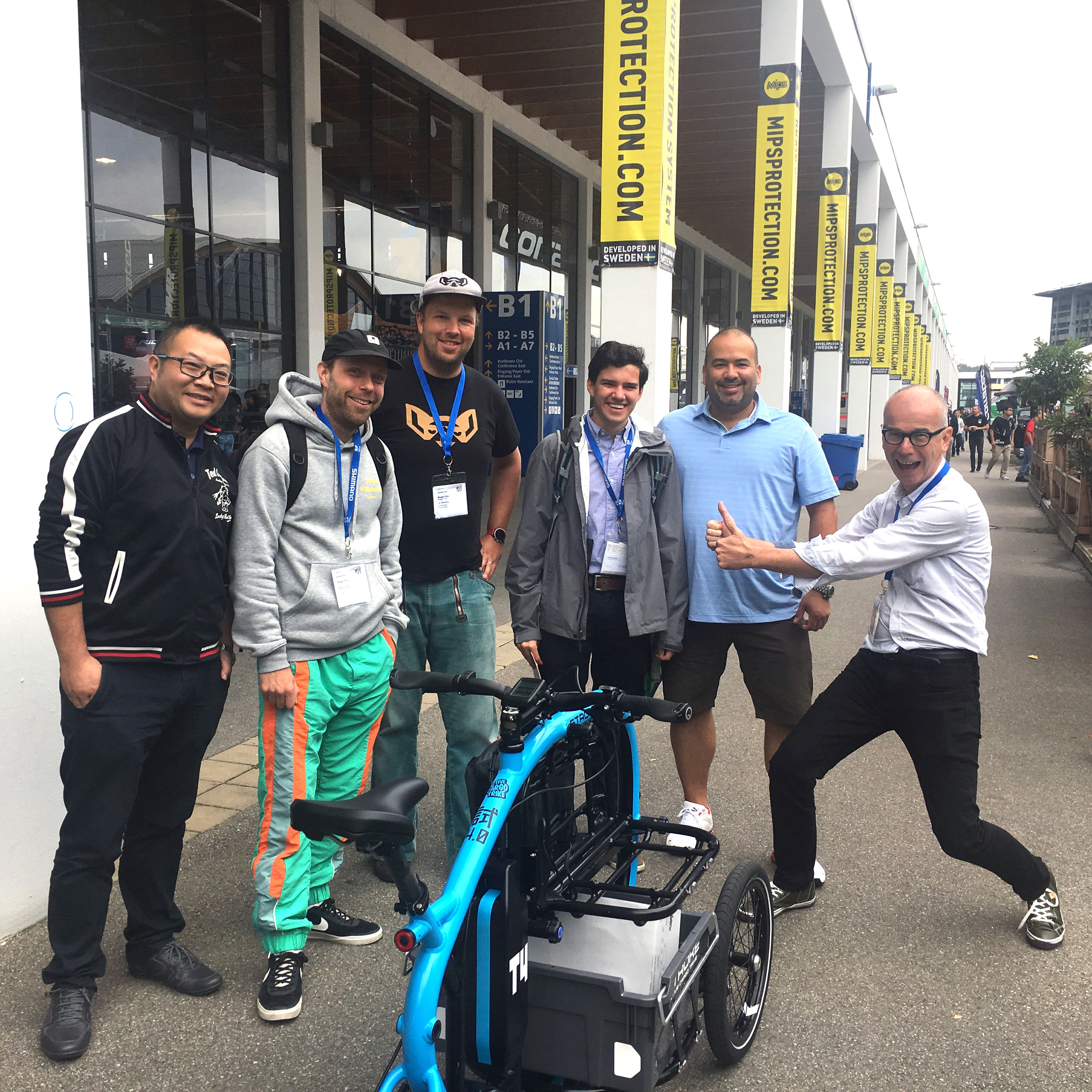 Too many people to name check here, but they all enjoyed whizzing round on the Active Cargo Trike! 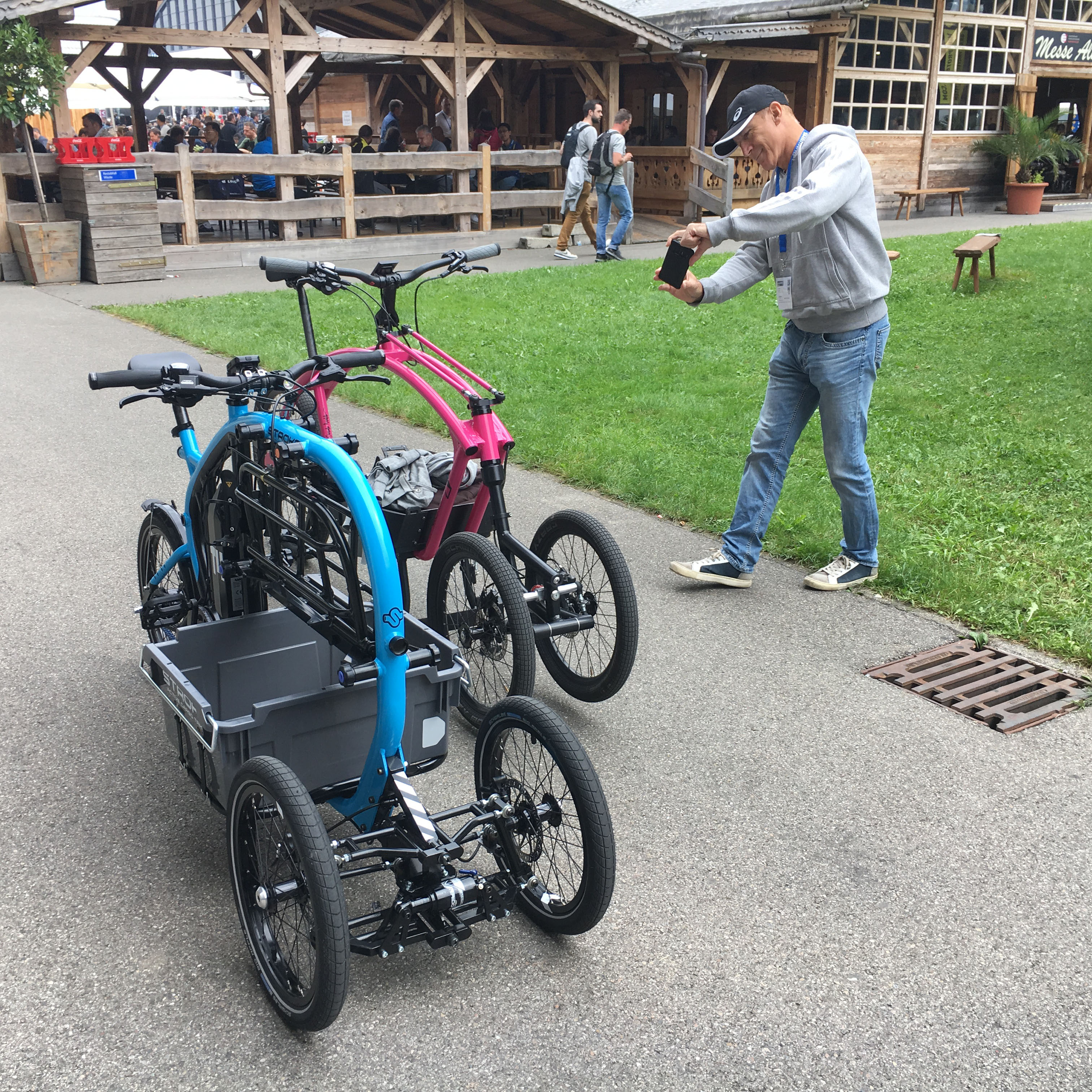 The guys from Vale brought their trike over especially. It has a narrow front track and trailing swing arms, unlike the Cargo Trike’s double-wishbone system. You can see their formation test ride in the video. 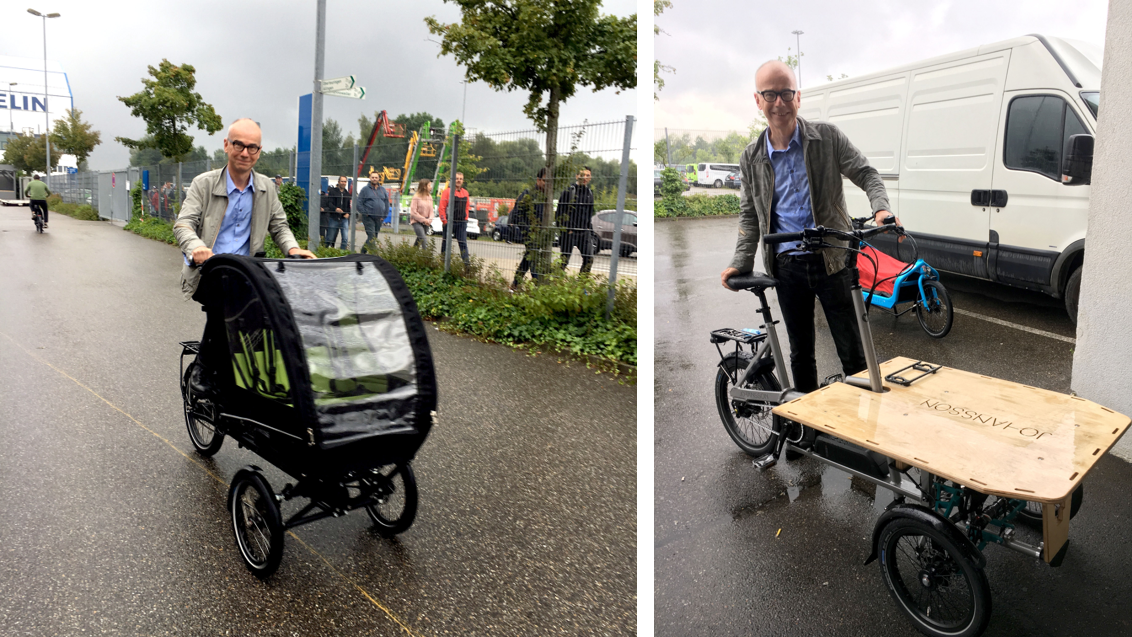 My last morning at the show was my first chance to take a look round. I managed to squeeze in a test ride of the Chike and Johannson compact cargo trikes. Both companies were very welcoming and helpful and, for different reasons, riding their products confirmed that we are taking the right direction.

Everyone who took a test ride looked like they were having a great time. We aimed for a natural riding feel for any bike rider and STROKE’s tagline is Active Cargo Trike. It looks like we have hit the spot!

Diatec and Bruno bikes, who invited us to Eurobike and could not have been more helpful, generous and supportive: 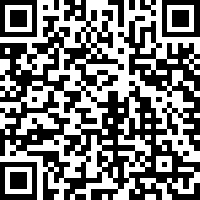